This section contains a text-based explanation and illustration of our in-house developed ADAMS based software called TKC (short for ToolKit Creator). The basics will be explained as well as the advantages of users of TKC in ADAMS. As a picture says more than a 1000 words, much of the functionality of TKC is also illustrated using YouTube videos. Please feel free to use and embed these videos, as long as you refer to Sayfield International.

Tutorials and screen recordings of TKC are placed on the Software tab.

If you are interested to make component-based, parameterized ADAMS models for your daily work, please contact us and we'll discuss the possibilities of bringing TKC as an ADAMS plugin to you or supporting you in other ways in making more efficient ADAMS/View based models.

We are convinced that, by using TKC in ADAMS/View to support the use of submodels and model components, you will make better quality and better documented ADAMS models in less time.

Check a selection of TKC based ADAMS animations and examples provided on our YouTube Channel (or search for TKC and ADAMS).

The main purpose of TKC is to provide a generic environment to allow ADAMS/View users to rapidly define dedicated component toolkits with minimal overhead in defining user interface elements. TKC is a layer of ADAMS macros allowing users to define and create dedicated ADAMS toolboxes in a matter of hours. TKC allows the creation of small vertical applications, but also of larger toolkits with more complex interactions between components.

At Sayfield we typically create a new toolbox with dedicated components in a matter of minutes to prepare for a demo presentation.

TKC base functionality vs TKC toolkits

When using TKC inside ADAMS there are actually two levels of usage:

No further explanation will be included in this section of the core functionality of TKC. This will be made available to you as a user manual on your request. Instead, we will give a description of some of the most important groups of Toolkits defined in TKC

A number of toolkits are defined in TKC to model Cable systems in several levels of detail. The basic idea here is that models of cables are as versatile in application and dynamics challenges as models of handling tires.

Because of these considerations with respect to required model detail, three types of cables are defined in TKC:

The CBL toolkit contains massless cables attached tangentially to pulley disks and other cable elements without slip. Rotation of the pulley and winch elements contributes to the extension and contraction of the force-based cable elements. Dedicated slipping elements are defined to model slip over pulleys using the Eytelwein formula.

Additionally, the CBL toolkit contains Midpoint based cable segments. Midpoint cable segments have an identical interface as the tangent cable segments and can be connected to the same pulley elements. As a result, model assemblies can be defined where all cables can be swapped from tangent to midpoint cables by changing a single assembly parameter and rebuilding the model.

The third level of cable modeling in TKC is based on a discrete element method. The level of detail is higher, and thus more geometrical parameters are required for a discrete cable than for the above-mentioned cable types. For discrete cables, the interface method between cables and their respective pulleys is based on contacts. Therefore for discrete cables a separate toolkit was defined labeled as CBT (for Cables, Belts and Tracks toolkit).

The animation above illustrates the stabilization of a belt with a finite width over tapered cylindrical drums. Comparing results with a zero belt width model confirmed that stabilization requires a non-zero width of the belt.

Transport is not limited to one domain. It deals with land transport (two-wheeled, four-wheeled, tracked), water transport (vessels on or in the water) as well as air transport (aircraft, kites, etc.). For simulation tasks in transport-related applications, a range of TKC toolkits is defined. We will show a sample of applications to illustrate simulation possibilities and give a taste of our past experience in modeling and capturing dynamics system components into building blocks for complex system-level models.

Besides the possibility of embedding TKC in ADAMS/Car, it has also been used to model complete vehicles. This was done, mainly as a feasibility test as cars tend to have complex axle components with numerous variations. The main challenge here was to conceive a method for defining a flexible range of vehicle suspension types while not cluttering the Toolkit repository by having to store code for all these types. The solution was found by defining a set of Axle Sub-Components such as Springs, Rollbars and wheel hub Uprights. These sub-components can be incorporated in an existing Axle model component to complete the desired axle topology. No additional Toolkit code is required as the interface and parameters of the axle sub-components is stored in the data object for the axle instance itself. The sub-component concept also gives more flexibility in modifying or even upgrading existing components. As a result, the sub-component concept is used more and more in recently developed TKC toolkits.

As the title already indicates, General Machinery contains a wide range of different application fields. In these fields, a number of mechanical building elements keep re-occurring. Dynamic models of a number of these building elements are captured in a range of TKC toolkits. Several of these toolkits have already been used and verified in a number of consultancy projects. In this section, we will show a number of ADAMS simulations created with TKC. Please contact us if you want to know more about any of the toolboxes used.

A first conveyor belt example shows a model of a discrete belt modeled as rigid segments with additional geometry on each segment. In TKC, all geometries in a component can be tagged for use in contact connections to other components. As a result, users can make a complex component-to-component contact, possibly introducing hundreds of separate contacts, with a single command. For conveyor systems, this approach ensures that all conveyor segments make contact with geometries of a range of transported objects.

A second conveyor type model illustrates the use of a number of new components in CBO, a dedicated toolkit for transporting Cardboard Box-shaped Objects. This toolkit has been defined in a consultancy project and illustrates the advantages of using Multi-Body simulations in prototyping transport systems for products with complex and varying system conditions.

A number of CBO components are described to illustrate the typical system-level approach used in TKC toolkits to allow running a range of different simulations. The figure below shows an overview of the CBO toolkit functionality. 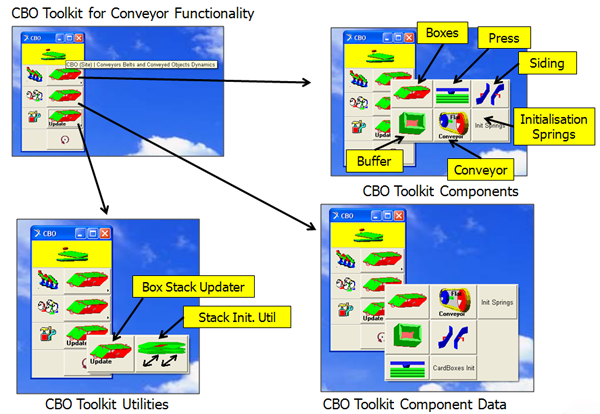 Basic components defined in the CBO toolkit are:

Bearings are one of the most used components in the mechanical industry. In creating a model for a bearing, similar questions will come up with respect to the modeling of cables and tires. The main decision factor for the bearing model to be used is the level of complexity required in the output signals. For a simple case, a revolute joint will be sufficient to model a bearing. On the other hand, bearing manufacturers have developed bearing models with over a thousand degrees of freedom that require hours of computer time to simulate one revolution.

The TKC environment has been used to define bearing models at a reasonable pragmatic and simplified level. The framework of TKC, however, does not limit in any way expansion towards more complex bearings or using external codes connected to ADAMS. We have included an animation of one of the medium level bearing models defining 7 DOF to describe the relative motion of the parts for the balls and cages.

In several recent consultancy project, models of cams and gears were required to transport motion through a mechanism. TKC now contains a gear toolkit including a tool to define the evolute shape of gear teeth contact. Option are available in the toolkit to vary between Planar gears, Three-dimensional contact-based gears and flexible gears based on discrete elements. An extension to include flexible bodies into the toolkit is considered for the near future.

Several examples have already been included in this document to illustrate use of ADAMS in the area of heavy transport. One additional movie is included here to illustrate the possibility to define booms of cranes using input data from the FEM code STAAD. The model illustrated is automatically created from a STAAD input file and also illustrates the possibility in ADAMS to make complex

Sayfield has worked with several companies to investigate possibilities for an ADAMS based wind turbine toolkit. The model below demonstrates the possibilities of a TKC based wind turbine toolkit that we developed. The toolkit was considered a useful model environment in an evaluation project performed in 2004 by ECN and Vortech engineering. The animation shows a simple wind turbine model with a discrete flexible tower and a basic model of the gearbox and turbine blades. Definition and registration of the required components were done in a matter of hours, allowing the engineers to focus on component details and still keep an overview of the model topology.